Various Small Fires is pleased to present the first solo exhibition in Asia of the American artist Josh Kline, an extension of the artist’s Civil War project, which explores the catastrophic implications of America’s political dysfunction.
For over a decade as an artist and curator, Kline has surveyed the current and potential future world crises emerging from the political, economic, technological, and biological conditions inherent in neoliberal capitalism. Kline, who often presents dystopian visions of societal breakdown in his immersive installations, concentrates in his concise exhibition at Various Small Fires on the toxic power of America’s current media ecology, with six wall-mounted sculptures based on flat-screen televisions. The American flag, often referred to as “Old Glory,” is forged and transformed by Kline. In his new sculptures, the flags fold, collide, and dissolve, referencing the animated nationalist symbols, graphics, and political advertisements that often appear in the American news media and political propaganda driving America’s ongoing, slow-motion disintegration.
VIRTUAL REALITY WALKTHROUGH
The double-sided sculptures, anchored by extendable wall brackets, are cast from televisions made by leading Korean technology brands LG and Samsung—the most common brands of televisions in American homes. The works draw attention to their own construction in order to reference global trade conditions, the loss of manufacturing jobs to automation and outsourcing, and the impact of national political events across international borders. Kline’s televisions also allude to the monopolization of media and the relentlessness of “fake news” in our era. Alternative Facts invites viewers to consider how we witness on our screens, on a daily basis, the distortion of political reality by increasingly authoritarian governments.

Installed in South Korea, a country with both a democratically elected government and one of the most competent and effective responses to the current global pandemic, Alternative Facts offers a view from outside America of the 20th Century’s hegemonic superpower disintegrating at the seams. On billions of screens, the world watches as the myth of the United States as the shining city on the hill, first among first-world nations, is revealed as tattered propaganda from an earlier age. The televised screen, a conduit of both facts and misinformation, today broadcasts the confusion of a delirious national political system – one that is unable to offer the most basic services and guidance to its citizens – and further reveals the decline of the American image that had already been underway. 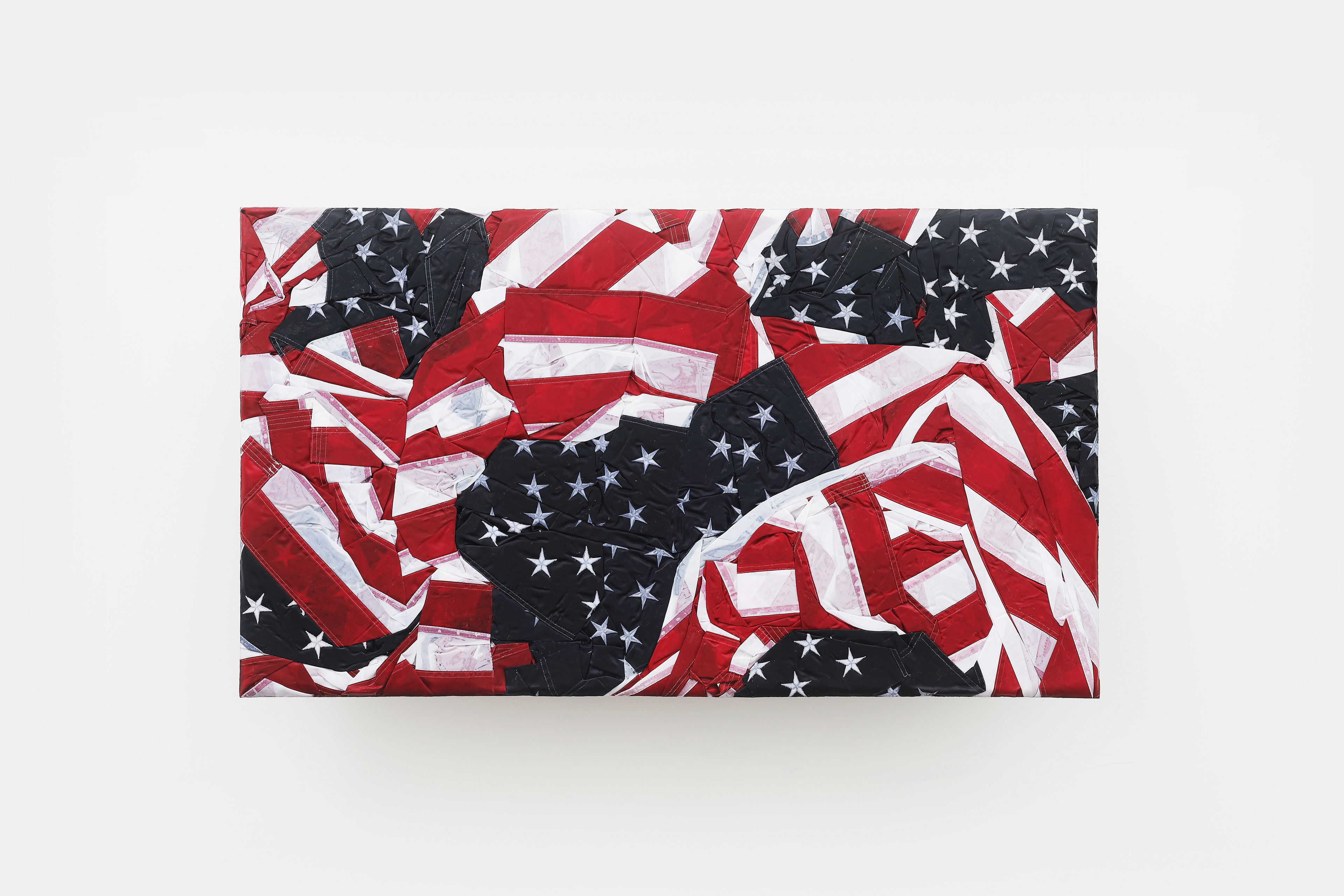 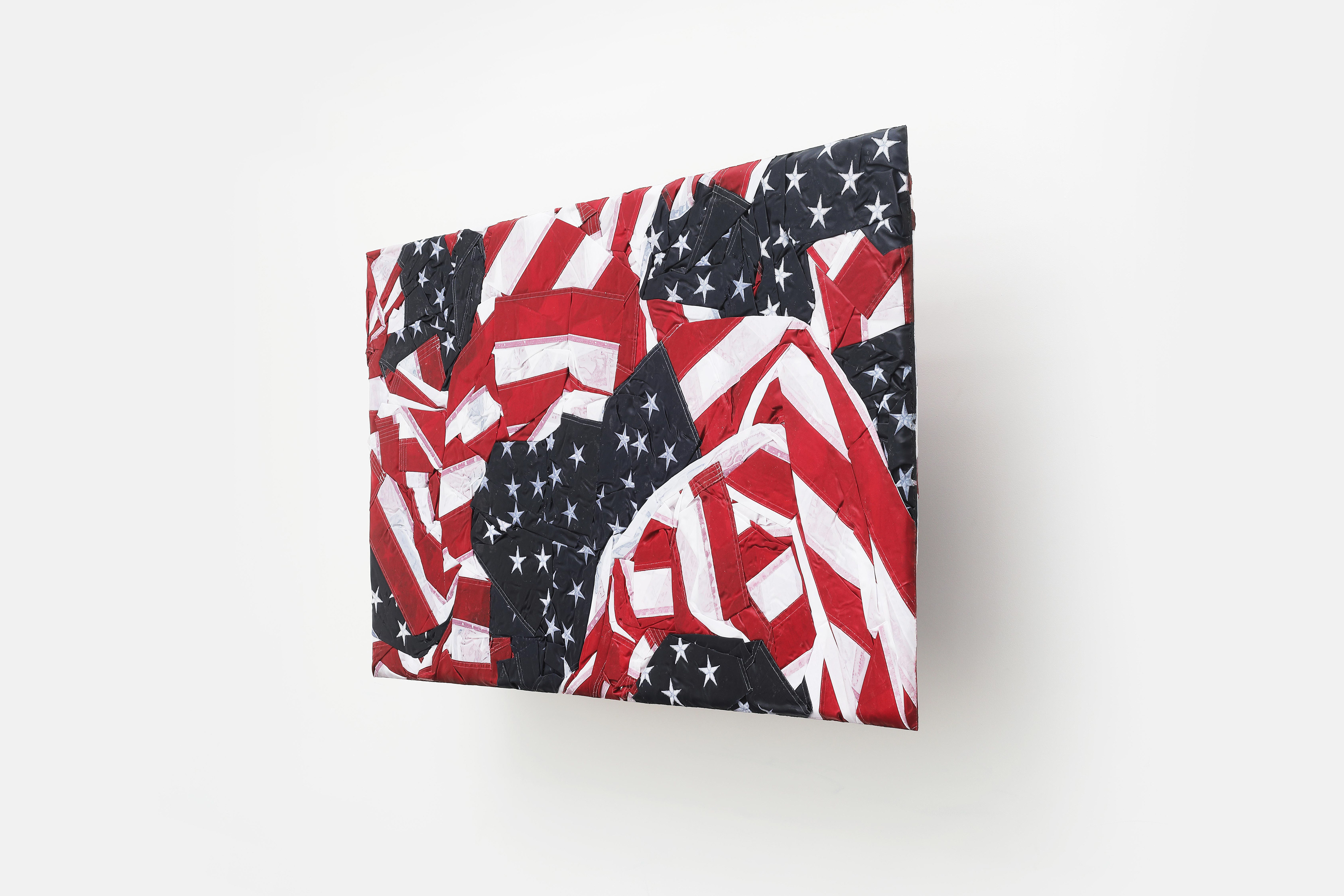 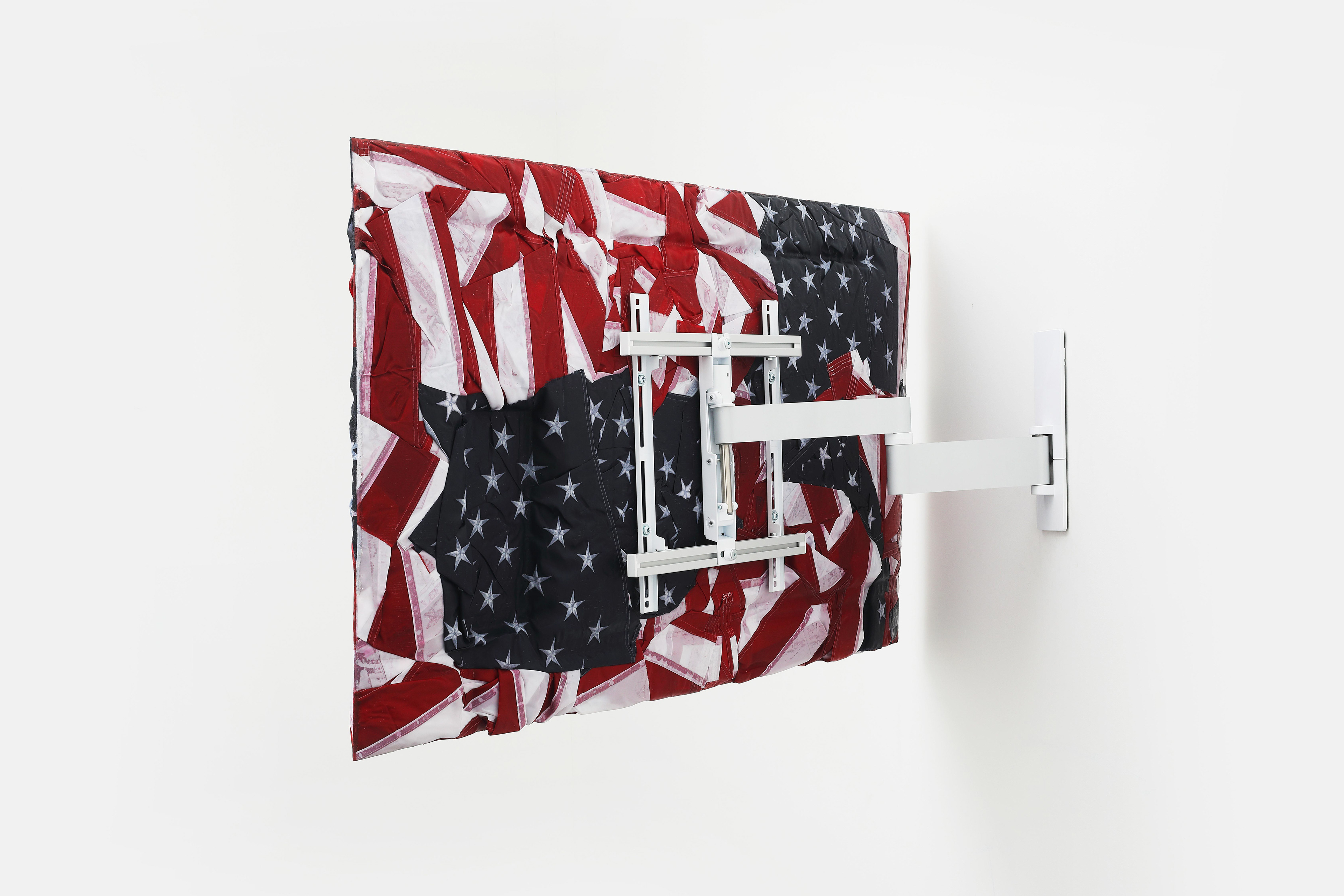 Josh Kline
Alternative Facts, 2020 (installation view)
Various Small Fires, Seoul, KR
Josh Kline (b. 1979, Philadelphia, PA) works in sculpture, installation, and the moving image. Kline’s practice considers how our humanity has been transformed, commodified, and instru­mentalized by technology and capitalism. In 2015, Kline began a major cycle of installation-based projects exploring the politics and economics of the 21st Century, including technological automation, climate change, and social media’s impact on democracy.

In 2020, Kline will also have solo exhibitions at Astrup-Fearnley Museum, Oslo and LAXArt, Los Angeles, and be included in group exhibitions at the Stedelijk Museum, Amsterdam; Schinkel Pavillon, Berlin; and the Belgrade Biennial. Recent solo exhibitions include Climate Change: Part One at 47 Canal, New York (2019); Civil War at Stuart Shave/Modern Art, London (2017); and Freedom at Modern Art Oxford, Oxford (2015). In 2019, Kline’s work was included in the Whitney Biennial 2019 at Whitney Museum of Art, New York; The Body Electric at the Walker Art Center, Minneapolis; New Order: Art and Technology in the Twenty-First Century at MoMA, New York. Kline’s work is in the permanent public collections of The Museum of Modern Art, New York; Solomon R. Guggenheim Museum, New York; and Whitney Museum of American Art, New York.

SEOUL: Next of Kin